In the last few months, I’ve been at several events where I have met fellow researchers from a range of different disciplines. This has entailed coming into contact with many people who I would not normally encounter in a typical working week. Notably, it has involved talking to many people who work in the sciences rather than just in arts and humanities.

At school, the breadth of the Scottish education system meant that I was able to study a mixture of arts and science subjects at secondary level. Indeed, the five subjects that I chose to study as Highers were English, French, German, Maths and Physics. Although my first degree was in French and Philosophy, being able to combine arts and sciences right the way through secondary school may explain why I also studied Statistics during my first year.

Since then, I have generally remained more firmly within the confines of the arts or arts and humanities. Nevertheless, I remember meeting researchers from other disciplines at postgraduate training events when I was doctoral student. As a lecturer, such encounters have been somewhat rarer. I have discussed issues to do with teaching and student support with colleagues from many other departments at meetings but not always research.

However, things have started to change over the last year. First of all, I participated in a series of ‘random coffee trials’ organised here at Bangor University. These involved being paired with someone from a different department and discussing your research together over coffee. Although I can’t really say that much potential for collaboration emerged from the two meetings I had in this scheme, it was good to hear about other people’s research and meet colleagues from other departments with whom I wouldn’t normally come into contact. First, I met a colleague who worked in the field of public health and then another one from psychology. 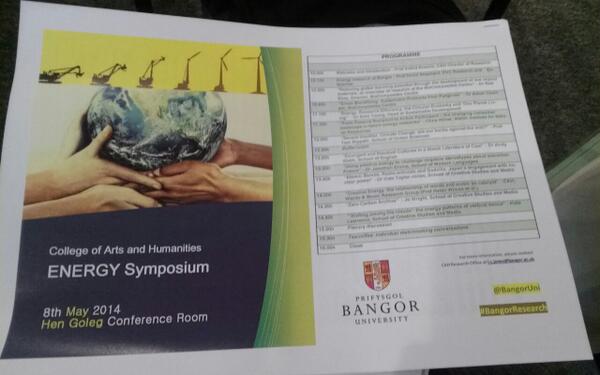 In May of this year, I participated in a one-day symposium on the theme of energy that was organised by the College of Arts and Humanities here at Bangor University. The event brought together researchers from the sciences as well as arts and humanities in order to discuss the importance of the theme of energy. The talks covered topics such as sustainable packaging, recycling, media debates on global warming and the importance of energy in both Welsh literature and Asian cinema. My own presentation focused on the symbolic importance of energy as a theme in documentary films about young people living in suburban France. I began by examining different definitions of energy and how they could be applied to the films that I was analysing.

Despite there being people from so many different disciplines present, it was clear that there common interests in over-arching themes to do with energy and how it is perceived. This really showed the benefit of bringing together people from different disciplines who are all interested in a broad common theme. On a personal level, it provided me with a new way of approaching some French documentary films from a slightly different angle from before.

The most exciting opportunity to discuss my research with people from different disciplines that I’ve had this year has come via a scheme called the Welsh Crucible. The Welsh Crucible is a scheme whose main slogan is ‘developing future research leaders for Wales’ and it does so by annually bringing together 30 researchers from Welsh universities for a series of two day events. These events, known as labs, focus on general topics such as working with the media and policy makers as well as networking and also how to develop innovative cross-disciplinary research.

Through participating in the Welsh Crucible, I’ve been fortunate to learn a lot about presenting and publicizing research and also met a lot of fellow researchers from different disciplines. Initially, it was much easier to see links between my own research and those of fellow participants from similar disciplines. However, I have progressively become aware of links between my own research and that of others who are in more different disciplines. Some of this stemmed from a ‘speed dating’ style session where all participants were paired up with another researcher and had three minutes to talk about each other’s research. Even from these 29 fairly brief conversations, some exciting commonalities emerged.

What my recent experiences have taught me is that there is real value in bringing together people from different disciplines. Inevitably, this can be somewhat speculative but a speculative dimension is often something that underpins innovative research. There is an element of unpredictability within this process, but I’d argue that this is precisely what makes it so exciting.

How important do you think it is for researchers from different disciplines to work together? What do you see as the advantages and challenges of these sorts of collaborations? Feel free to let me know via the comments box below, I’d really welcome feedback on what I’ve said here.

I’m not sure what Descartes would have made of blogging. It is perhaps pushing it to suggest that he might have said ‘je blogue donc je suis’ (‘I blog therefore I am’) rather than ‘je pense donc je suis’ (‘I think therefore I am’) if he were alive today. However, blogs and social media have an increasingly important role to play in disseminating academic research and creating links between academia and the wider world.

In the United Kingdom, the Research Evaluation Framework (REF) now attaches increasing importance to the impact of academic research outside the academic community. However, I see engaging with the world beyond academia as being more than just a box-ticking exercise. Given that I work for a university that came into being after sufficient money was raised via public subscription, engaging with the public is something that I see as a moral duty.

We are now in an era when an increasing number of academics use blogs to disseminate their work and engage in dialogue, and also use social media such as Twitter and Facebook to publicize their research. As Deborah Lupton suggested in an article on the website The Conversation, there are both benefits and risks associated with such an approach.

I can certainly identify with the time pressure factor that Lupton cites as a reason why some academics choose not to blog. Indeed, it took me quite a while to settle upon the layout and about section of this blog before publishing my first post. However, I’m now hoping to write a new post at least once every two weeks. I see this blog as providing a means of reaching – and entering into dialogue with – readers who might not have as easily come across my research.

One of the advantages of having a Facebook page for this blog is that I can post short updates or comments that would not be worthy of a full blog post on here or which might not be of interest to many of my Facebook friends. For me, a crucial part of being a blogging academic involves deciding on what boundaries and uses of social media you are comfortable with.

Over the last year, I have enjoyed presenting my research in a variety of different settings. In addition to giving papers at academic conferences and writing articles for journals, I have also written two articles for the website The Conversation. The Conversation is a website that features short articles by academics on issues in the news that are relevant to their own research.

In February of this year, I drew on my research about comedy and diversity in France to write two articles for The Conversation about a controversial gesture by the French footballer Nicolas Anelka that led to him facing disciplinary charges from the English Football Association (article 1, article 2). Indeed, last month I was interviewed on BBC Radio Wales about football and national identity in France (see my first blog post in which I mention this).

Knowing what the media is after from academics can be a challenge and I have been lucky to have benefited from training on this topic from both my own university’s press office and as part of the Welsh Crucible scheme that aims to develop future research leaders for Wales. Indeed, during a media training session at a Welsh Crucible event in Cardiff I had to write a 100-word piece about my research that was aimed at showing its relevance to the media and current events.

This task, for which I was given a mere 10 minutes, was certainly tough. However, it replicated the sorts of challenges that you can face when presenting your research to a wide audience. Communicating your research in an 800 word article for a website rather than a journal article of several times that length can require a bit of practice. Indeed, the same could be said about knowing how detailed or technical to be in a four minute radio interview. However, these are challenges that are part of being a modern academic and presenting research to the world beyond academia.

What do you think of this article? How important do you think it is for academics to blog about their work and engage with the public via media interviews and using social media? Feel free to let me know via the comments box below, I’d really welcome feedback on what I’ve said here.